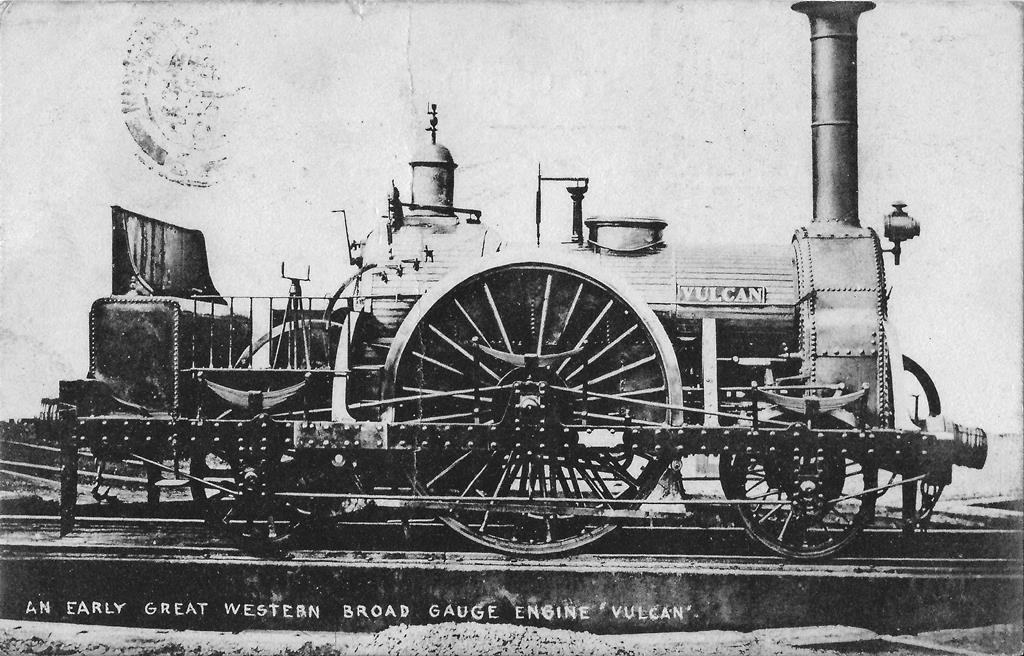 In 1836, I.K Brunel drew up a set of locomotive specifications for the fledgling GWR. These specifications proved to be a handicap to the designers who produced some bizarre and less than successful locomotives. Brunel ordered nineteen locomotives from six different manufacturers. The manufacturers were mostly from the North of England. Finally, the locomotives were of the 2-2-2 wheel arrangement and looked very similar to each other. Below we look at the best and worst of the builders.

Brunel specified that the maximum piston speed be too low, in fact, it was half the normal speed. Next, the specified boiler pressure was 50lb per square inch. This was the same as Rocket and out of date by 1836. Another problem was the weight, he recommended a very low weight of 10.5 tonnes resulting in two chassis being needed, see below.

Some of the Early GWR engines were a total disaster, barely running 10,000 miles before being scrapped. As a result of Brunel’s eccentric specifications, the engines Hurricane and Thunderer had the engine and boiler mounted on separate chassis. Designed by T.E. Harrison, these bizarre locomotives were a complete failure. Hurricane was more like a mild breeze, being underpowered and with too small a boiler.

The Tayleur engines were more successful, although they were overweight at 18.5 tons. In fact, these engines were the first to run on the GWR in 1837.

Typical of this series was Vulcan, a 2-2-2 locomotive with 8ft driving wheels. Consequently, these also suffered from too small a boiler. In this early form, Vulcan ran until 1843 when it was rebuilt as illustrated with smaller carrying wheels and a back tank. There were a further four engines of similar design, that ran until 1867.

The Mather & Dixon locomotives had larger driving wheels but lower weight. Consequently, they proved to be useless and lasted only a few years. Gooch considered them to be too expensive to modify into something useable, and most were scrapped by 1840.

Sharp Roberts & co were initially based in Manchester and became one of the more successful Locomotive manufacturers.

The three locomotives made by Sharps more closely followed current practice and hence stayed in service the longest, without being modified. They were withdrawn in 1847. The 2-2-2 Sharp singles became ubiquitous and 600 were made.

In the 1830s a lot of engineering companies wanted a piece of railway action. They went into locomotive manufacture, some not knowing what they were doing. These companies lasted but a few years, while others survived for decades.

The locomotive designs looked very similar to each other, mainly because most engineers were following the current design paradigm. In this case, set by the Stephensons. Brunel was also using the same paradigm but to an extreme degree, rather odd for such an innovative genius! Locomotive design was not Brunel’s strong point and he soon handed over to Daniel Gooch who redesigned most of the early contenders.

The Hornby LSWR Drummond T9 originally came out in 2008 and has been issued in four different Liveries, the most recent being in LSWR light green. There is also a brass masters kit of the T9. The latest Hornby model represents the only survivor of the class, No 120. The model was issued in late 2020.

The most common type of passenger locomotive at the turn of the 20th century was the 4-4-0. There was a remarkable range of designs and liveries. The Drummond designed LSWR T9 went into service in 1899. The cylinders were 18.5″ in diameter with a 26″ stroke. Additionally, the coupled wheels were 6′ 7″ in diameter.

The best known and fastest 4-4-0 ‘s were probably the GWR City class, for example, City of Truro, modelled by Kitmaster, later Airfix, in the 1960’s.

Get you Metcalfe kits ready made

The Hornby T9 model has been in the range since 2008, Early T9 models suffered from motor mounting rot. However, Later models were OK. They also had some short lived, over complicated packaging. Additionally, connecting the tender was fiddly. As well as individual locomotives no. 312, in Southern green, also appeared in a train pack R.2813. At over £150 they are not exactly cheap but the level of detail is amazing.

The level of detail impresses although the pipework is rather fragile. The smokebox door has a separately fitted dart and the buffer beam sports sprung buffers. Lamp irons are fitted and prone to breakage. Moving along, Under the boiler the valve gear is nicely represented

The rather unforgiving green livery is well applied, as is the banding. The splashers have a very fine white outline. There are no glue marks and the finish is a silky mat. There is also some fine moulded detail on the boiler. The design aesthetic of the original is lovely. Note the outline painting of the recess for the connecting rods. The copper pipework is plastic but well represented. However the safety valves are made of metal.

The front bogie is centre sprung which helps to hold it on to the track on bends. As a result this gives much more realistic running.

There are also some substantial pickups on the front bogie.

The tour de force of this model is the cab detailing. For example the gauges are legible and have glass! Additionally there is some very fine individually fitted pipework.

Running is excellent with a five pole motor. Early versions may have mazac rot, however you can obtain new brass motor mounts.

Most versions of the model are still available on eBay. The most recent is probably worth the money considering the finish and level of detail.

Of the more than 20,000 locomotives in use at the turn of the 20th century, over one third were tender 0-6-0 types. In Scotland , the NBR decided to replace a number of older 0-6-0 locomotives. The J36 was known as the C class and was introduced in 1888. They were very successful locomotives, with over 100 being built by 1900. From 1913 the engines began to be rebuilt. A number served in France during WW I and were consequently renamed with tribute names.

The J36 was mostly used in Scotland for goods and passenger duties. They could also be seen in North Yorkshire. 123 locomotives continued into British Rail Service. Two were still in use in 1967, with only one being preserved.

All images, the author. The model is available in a number of liveries. LNER, two original North British liveries and an early British Rail colour scheme.

In March 2019 “Maude” was released with TTS sound. This has a more elaborate North British livery. It is only available with TTS.

The J36 is quite a heavy model with a good flat black paint application. The boiler and firebox are made of die-cast metal as are other components. There is no boiler banding, only the running number and name are printed. The front windows are glazed. The safety valves are made of metal, while the whistle is not. The running gear is blackened and the wheel axle ends are realistic.

The Cab detail is nicely painted although the gauges are not marked.

The internal valve gear is picked out in red and the reversing lever is made of metal.

The tender is well detailed with sprung buffers and a pre-fitted NEM coupling.

The verdict and running.

The model is good value for money at around £99. It is a smooth runner and the amount of die-cast is a bonus. The DCC socket is in the tender. You will need to remove two screws to get access.

Replacing elderly low powered 0-6-0 locomotives was a task the LMS gave to the designer George Ivatt. He came up with a 2-6-0 design that had a 3000 gallon tender with 4 ton coal capacity. 128 2MT’s were built between 1946 and 1953. The LMS made 20 and BR then took up construction. The 2MT was a good general workhorse and seen mostly in the North and on the Western region. Some ran till the end of steam and there are seven in preservation.

The Hornby Railroad Flying Scotsman is based on the world famous Flying Scotsman locomotive .She was built in 1923, for the LNER. The incomparable Nigel Gresley was the designer. He was the chief mechanical engineer of the GNR. The Great Northern Railway was one of the constituent companies present for the grouping in 1923. Flying Scotsman is a Pacific locomotive with a 4-6-2 wheel arrangement. The first Pacific in the U.K was built for the GWR in 1908. That was the “Great Bear”.