Welcome to another retro review. Here we look at a Triang wagon from my Collection. This is the R.15 United dairies four wheel milk tanker. All photos, the author.

Milk tankers had two ladders, one on either side so that a rubber filling hose could be inserted into a flip top dome shaped receptacle. They had taps above the buffer beam so that the tank could be emptied. Various design and livery variations, were to be had, depending on the company.

The Triang model was in production for 20 years, although it underwent many upgrades . The R number never changed. The early X11 chassis and coupling were crude, with “blobby” buffers and simplified brake gear. This model was in the first 1955 catalogue, with the X11 chassis. The later chassis had much more comprehensive brake gear.

Some of the Triang versions had exposed axle ends, no axle box covers.

Compare the later X356 chassis below, with the X11 chassis.

Firstly, the model has over scale ladders and rather fragile buffers. These are often missing or broken. Next the early models used transfers for the lettering, these are often damaged or missing. Finally, the paint turns yellow. They were originally painted white. 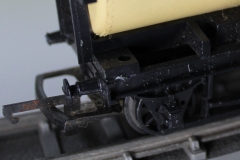 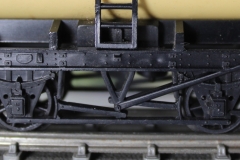 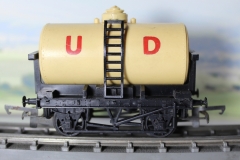 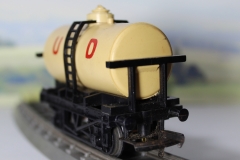 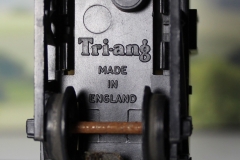 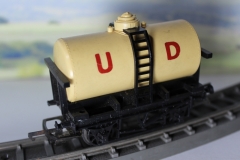